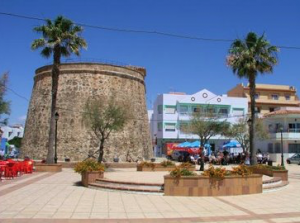 Time for a bit of a history lesson! The “Torreon” or Watchtower in La Cala is a very prominent feature sitting in the main square and right on the beach front. For just 1 euro (correct at time of writing this) you can enter the tower. Included in the entrance fee is a short 7 minute video you can watch, then you can go explore inside the tower. It´s a worthwhile 1 euro spent if only to see the views from the rooftop!

The tower is horseshoe shaped in design, it is formed by a prolonged semi-circle with two lunette (moon shaped) salients. Its perimeter measures approximately 35 meters and it is over 10 meters tall. 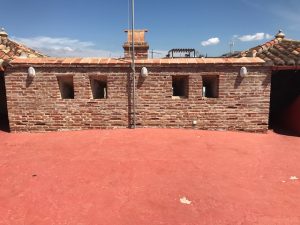 Inside the tower you will find two floors, the lower floor known as the “Santa Barbara” is at ground level. The top floor or main chamber is illuminated by two windows and has a brick vaulted cellar. It is equipped with what were all the necessary services back in the day (pantry, a huge fireplace, etc). Finally, a roof terrace with a parapet and a chimney. On the two lunette salient there are roof terraces, where there are two turrets. Both turrets have arrow slits on the front which are covered with Arabic tiles. The tower has been built of brick masonry with various elements such as corner post, jambs and lintels, embrasures, parapet mouldings, interior walls and vaults. The original access to the tower was 6 feet high up. 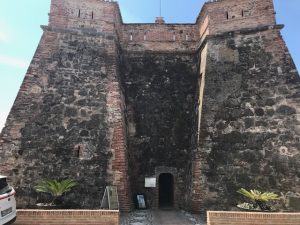 As indicated in a report of 1773, the “Reducto” Tower of La Cala del Moral was built in that year. A year later, another report mentions that the tower was equipped with two cannons of 16 or 24 pounds in weight and that they were in good condition.

In 1821, it was noted that Torre Cala del Moral Artillery needed new ground for two cannons of 8 pounds in weight and needed considerable works.

Later, in a document of 1830, the tower is described as a circular tower of 11 “varas” (measurement considered to be nearly a meter) in diameter and enclosed with a fortification of 13 and a half “varas” high and a tower which was garrisoned by a corporal, three tower keepers and six soldiers.

In 1849, a report is made saying the tower is in a very bad condition and is advised not to maintain it, nevertheless in 1857 it is mentioned that the tower had been repaired and is in good condition. 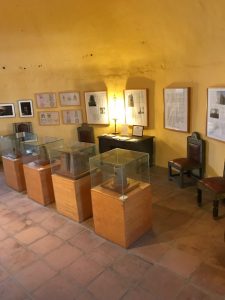 In the past century, the tower has been used as a home; a front door was opened at street level, as well as a window, into what was originally the ammunition depot. Later, it was restored by the Town Hall of Mijas, who turned the building into a museum. Currently it is the home of the Interpretation Centre of Watchtowers.