The Romans first taught the Andalucians how to cultivate wheat and vines and used the fish from the seas to produce the best garum in the empire while the Arab conquest of Spain also brought  with it new farming techniques and an invasion of exotic new produce. Further improvements to irrigation systems helped the cultivation of olive trees and the production of olive oil while the Greeks, Phoenicians, Carthaginians and Visigoths left their mark on the art, science, culture and gastronomy of Andalusia.

The Med provides fish the quality of which is hard to find anywhere else in the world. A good example of this is the red tuna, which when it swims from the Atlantic Ocean to the Mediterranean Sea on its yearly migration route, is so delectable, so rich in aroma, just so unbelievably good that it has revered around the world. Sole, sea bass, white sea bream, red snapper, snapper, hake, red mullet, sardines, anchovies, plaice, whiting, king prawns and shellfish, are just some examples of the wonderful seafood on offer in this glorious part of the world. 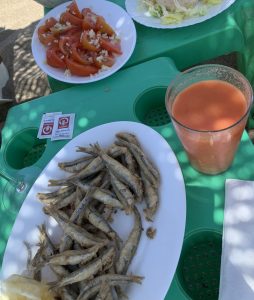 While buying property in Andalucia is rarely a decision people regret, the cuisine you will be surrounded by is a bonus that prospective buyers often do not consider. The Andalusian market garden has an abundance of varied products. Almeria especially stands out in this respect as it has developed a system to cultivate vegetables during the winter months. Top quality vegetables abound, such as the tender baby broad beans from Jaen, extra-early potatoes from Motril, asparagus from Huétor Taja and world renowned artichokes which are especially delicious when cooked with clams, and aubergines, which Al Buran used for the first “alboronía” (vegetable stew).
Elsewhere there are dishes specific to the historic towns of Andalucia, such as Habas a la Rondeña: a unique dish from Ronda – the enchanting Andalusian town that enamoured the poet Rilke, Orson Welles, and the Bloomsbury writers, among many others frequented. Like many Spanish dishes, it is defined by its attention to quality produce and simplicity – with this dish a delightful blend of fresh broad beans.

And then there is the glorious fruit, which includes the sweet and tasty mountain oranges from Cordoba, persimmons, medlars, pomegranates, figs, prickly pears, strawberries from Alpujarra, as well as cherimoyas, avocados, mangos, guavas, papayas and many other subtropical fruits from the coast of Granada and Malaga. 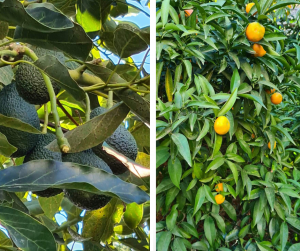 Spain is of course famous for its Iberian ham, which is held up as gold standard of cured meat around the world. Of all the cured and salted meats and sausages which abound in Spain, jamón ibérico de bellota is surely among the finest in the land as it is made from pigs who have been fed exclusively on acorns. All the cured ham produced in the mountain ranges of Huelva and Cordoba is exceptional with such a rich aroma. In recent times, food scientists have begun to revise their negative views on cured meat from a health perspective as its composition of monounsaturated fatty acids may actually be far better for you than most other meats. To buy property on the Costa del Sol is also to become part of a vast and localised food ecosystem where much of the vegetables and meat you buy is from the very area you live in. This is a unique position to be in in Europe where mass importation of foods from around the world has eroded local produce. The Costa del Sol however has refused to be led astray by massive corporations and stays true to centuries of tradition with regards to food and produce.
The Costa del Sol is also famed for its gazpacho, or better said, the many gazpachos such as ajoblanco (garlic and almond), salmorejo (much thicker and made with tomatoes only), porra antequerana (with eggs and tomatoes), pipirrana (with green peppers, cucumber, tomatoes and onion).
Stews have been a stapled of Andalucian homes for generations. While they were once a working class staple, today they have seen a resurgence that has seen them become much more fashionable in restaurants. Casseroles made with cabbage, fennel, or spinach and cod, and stews such as gypsy stew are again appearing on the most selective of menus. Ingredients such as oxtail, giblets, lamb stew, chicken or turkey in sauce with egg and almonds, Seville-style duck and kidneys cooked in sherry, form part of the meat dishes on offer in Andalusia and taste divine when seasoned with aromatic herbs. This back-to-basics gastronomy sees no signs of abating and you will find it supremely easy to get in touch with the authentic side of Andalucian cuisine should you chose to invest in real estate here. And it wouldn’t be Andalusia without a mention of tapas which you cannot avoid here. Some bars offer interminable lists with over a hundred specialities, and it is common for bars to prepare two menus – one long version and one with the seasonal products available – and serve each tapa with its best accompanying wine.
Flamenquines – Andalucian Fried Pork Rolls – are typically served as a tapa and come from the Andalusian town of Andujar. They are perhaps the unsung hero of specialities on the Costa del Sol and are hugely popular here. The rolls can also be made with beef instead of pork, and some people like to add slices of cheese. Whichever ingredients you choose, these rolls are unforgettable and are a must have if you ever find yourself in this part of the world. Those with a sweet tooth can rest assured that desserts on the Costa del Sol live up to their savoury counterparts. The usage of almonds and honey in Andalusian confectionery is reminiscent of the Moor occupation. Convents have conserved these traditions and offer yemas de San Leandro (an egg yolk cake) “buñuelos de San Benito”(fritters), piononos de Santa Fe (rolled sponge cake), pumpkin sweet cakes, hojaldres de cabello de ángel (pastries filled with pumpkin puree), crystallised grapefruit, fruit in syrup and aimones (sponge cakes). There are few cuisines that make people come together in the way that Andalucian cuisine does. It is about simplicity, great produce and coming together which is just another reason to consider investing in property here.